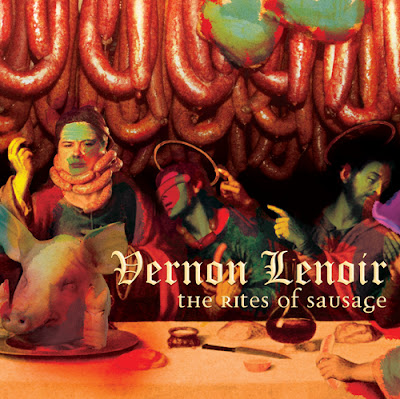 The very strange, enchanted composer, sampler-meister and fez wearer who goes by the moniker of Vernon Lenoir has spent the best part of the last decade knocking out consistently inventive and entertaining music on some of the world's most delicious netlabels including UpItUp, WM Recordings, and Egotwister.

He makes uberpopinexcelsis, tearing apart his own angle on pop cultures and slapping them back into his own forms. A sort of Buxtehude of beats, there is profound and irrestible cinematic musicality to the shapes Mr Lenoir makes.
"The Rites of Sausage" is a party album for a hallucinatory end of the world, when everybody has lost their minds and all they see before them are sausages, and visions within those sausages. Inspector Gadget and the Macarena make appearances. The latter transforms by Vernon's alchemy into a Balkan knees-up, while Rome burns. Ozzy Osbourne goes wild in a shopping mall. Simeon of Stylites gives in and throws shapes atop his pillar. The world fragments all around, with joy. 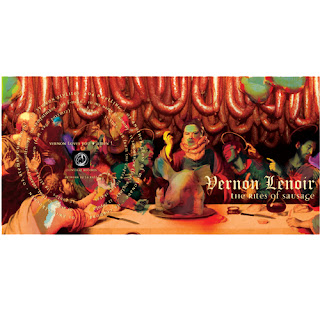 The album features collaborations with Roglok, Ergo Phizmiz, and Satanicpornocultshop. The beautiful artwork is by La Roll, which you can download a hi-res copy of here (6.86mb).
"The Rites of Sausage" is also available in FLAC, right here (204mb).