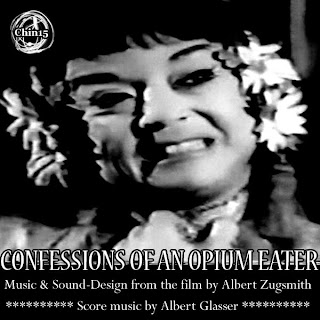 A new projected series of releases on Chinstrap is music & sound-design of interest extracted from public-domain films. Not claiming to be the definitive packaging of the music and sound enclosed, we rather present the work for the possibility of further investigation into the composers and sound-designers featured.

Albert Zugsmith's "Confessions of an Opium Eater" is a strange, flawed, but ultimately fascinating film, a truly weird adventure story which sees Vincent Price attempting to free trafficked women in Chinatown, smoking a healthy dose of opium along the way. The score, by incredibly prolific B-movie composer Albert Glasser, combines classically-tinged orchestral music with elements of jazz & rock'n'roll, traditional chinese music, electronic polyrhythmic pulses, and theremins. We are also served up some delightfully strange monologues from the dulcet tones of Vincent Price, in the midst of a very, very bad opium trip. The sound design is equally peculiar and disorientating, awash with ear piercing screams of smuggled Chinese ladies, squawking parrots, a myriad crashes and bashes, running water, and creaking ships.

You can download Zugsmith's "Confessions of an Opium Eater", starring Vincent Price, as an AVI here.

Legal disclaimer: This release is made under the belief that this score and sound-design are in the public-domain, and is intended to disseminate and raise appreciation of this film music. The Albert Zugsmith film "Confessions of an Opium Eater" is, to the best of our awareness, in the public-domain, and we are proceeding on the presumption that the score is also. If you represent the interests of Albert Glasser and object to this release, we will willingly remove it.

Chinstrap is a not-for-profit music gallery.